The Stone of Truth 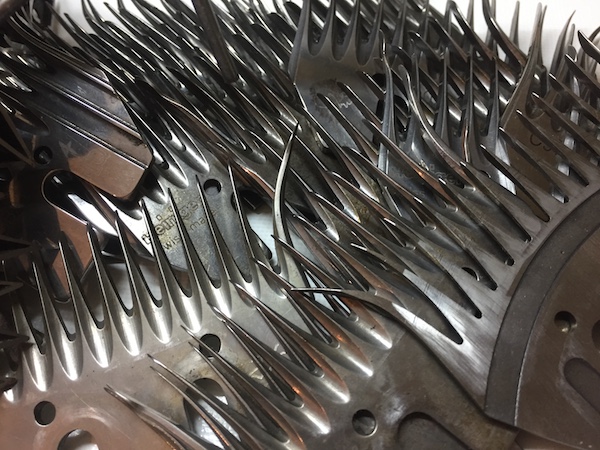 No Lies, Misconceptions or Myths

The Stone of Truth:  The Story

The stone of truth is simply a flat – very flat – aluminium oxide stone.  Once a shearer has sharpened their combs and cutters, sliding them over the flat stone of truth will reveal the highest surface of the comb or cutter ground surface; the rest of the surface hollows away in some fashion from these points.

So who cares about the hollow?  Well I do, and any shearer who is interested in getting a cut will also.

I went into one of Brain Beresford’s sheds in the South West of Australia to see a mate and on stand 6 or 7 was this guy shearing away with bare feet using the thinnest Heiniger Rapier combs I had ever seen in use.  His name was Mal Walton.  Now, Mal wasn’t the fastest shearer I had ever seen, quite the opposite actually, but what Mal taught me that day was more than I had learnt in around 3 years of constant “why?” about grinding shearing combs and cutters.

Mal was shearing these hoggets with Rapier, very narrow, plates they were ground out well past the tip radius with no curved clearance to be seen giving his comb the longest teeth ever, and he had around 4mm of lead gauged on the middle tooth.  On top of this he had around ¼ worn cutters and he was getting a great cut.  He went in to grab another sheep and I flicked his hand piece on and off and there was bugger all tension. This guy was getting a great cut.

I watched him for a couple of runs and he was using far less gear than some of the other guys but no more than anyone else.  My “why?” hat went on and I asked him “how do you grind”?  Well, Mal wasn’t shy at all and the explanations started to flow.

There was no thinking outside the square with Mal – there simply wasn’t a square of containment.

“To get a good grind you need one of these” and Mal produced a flat aluminium oxide stone normally used for sharpening knives, I think, telling me it was flat and he never ever let anyone else touch it.  I remember saying it will take a long time to grind up using that.

“No, you use it to check the quality of your grind” Mal went on to explain.  “When you paint the kid’s bedroom and make one wall a different colour you can stand back at the end of the job and see how good a job you did. Are the lines down the corners straight, did you go over the skirting boards at the bottom, etc.  When you sharpen a comb, you can see if it’s sharp but you can’t see where the hollow is.  By shifting a comb or cutter over the stone of truth you will mark the comb or cutter at the highest points on the ground surface; the more you rub it the more it reveals the hollow, and the shape of the hollow, and in fact if you have a hollow or not”.

The light went on.  Mal had just shown me a method to learn about the hollow when grinding.  It was a day I will never forget and a day that helped me more than anything else to learn about grinding / sharpening sheep shearing equipment.

The stone of truth doesn’t allow you to hide a result.  Sure, there are those that have no respect for the stone of truth at all but believe in the tension nut to make things cut.  For me it is a tool that every learner should buy, understand and respect as it will tell them no lies, misconceptions or myths.  It simply reveals the truth about hollows ground into the comb or cutter grinding surface with the sheep shearer’s grinder.

You have Successfully Subscribed!